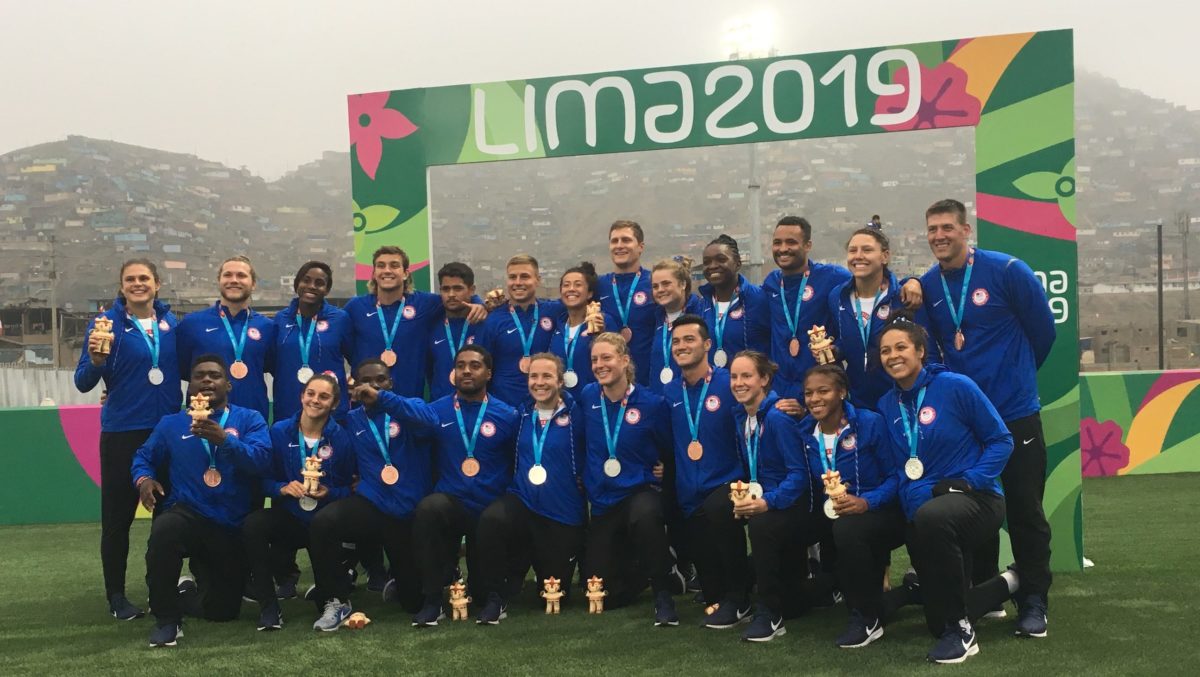 At the end of July, I had the unique opportunity to work with the USA Rugby Women’s and Men’s Sevens teams at the Panamerican Games in Peru. It was a true honor and adventure. The teams met for training in Chula Vista, and we arrived in Lima about a week before the beginning of the tournament. We were one of the first teams to arrive which was nice. We had brand new accommodations, and were welcomed with enthusiasm.

The Panam Games occur every four years, and any country from North or South America has the opportunity to be represented. I met athletes and doctors from countries all over these regions, and it was amazing to see how they all got along. It was a team atmosphere throughout.

The athletes and staff lived in the ‘Village.’ At the village there were six brand new apartment towers, and Team USA occupied most of Tower 3. There was a giant cafeteria, called ‘comedor’ in Spanish. Everything was labelled in both English and Spanish in the village. There was a large gym, pool, and locker room for all the teams and staff to use. There was a ‘Polyclinic’ where there was medical care available to all the teams. Some of the teams came without an Athletic Trainer or Physician, and depended on the Polyclinic for all their care. For example, the El Salvadorean Team brought only one doctor for all 52 of their athletes! Thankfully for our team, we had one Athletic Trainer for each team, and I served as the Team Doctor for both teams. The US Olympic and Paralympic Committee brought a large staff of Athletic Trainers and Physicians to help care for all the USA teams. The USOPC staff was stationed on site at the village.

Every day while in Peru our teams were bused to the stadium. We practiced and played at a brand new stadium called Villa Maria del Triunfo. The stadium was so new that most of the bus drivers didn’t know it existed, and certainly didn’t know how to get there! We got lost a couple of times, but in the end we always made it safely to the stadium and back. The stadium was beautiful and had all the amenities we needed. The Peruvian medical staff at the stadium was competent and welcoming.

The teams did very well, with the women earning a silver medal and the men earning a bronze medal. There were several injuries on the men’s team, and the last game they only had 9 players (2 substitutes). The games were intense and exciting. At one point the Athletic Trainer and I were handling two concussions back to back in the same game. Needless to say we worked hard!

I was thankful that our teams did well and that I had a chance to explore Lima. On one of the free afternoons, I went to the downtown area called Miraflores. It was an affluent area with a beautiful boardwalk and pier. There were tons of surf schools, much like in San Diego. I rented a bike and explored all over town before heading back to the village. On the last day of our trip I also got to go the surf competition at Puntas Rocas. It was amazing to see the beautiful facilities that the Panam Games brought to this area of Lima. It was awesome to see athletes from all over the region competing. It was nice to relax and enjoy the competition before heading home.

I had the opportunity to return to Haiti this June for another medical mission trip. There were seven group members on the trip – two physicians, a nurse practitioner, a physician assistant, a social worker, a pediatric nurse, and a paramedic planning to attend medical school.   All of us were female, and most of us had been to Haiti before. On this trip I served as the Team Physician – caring for the medical needs of our own team in addition to serving the people of Leon, Haiti.
Over the course of the week we cared for hundreds of Haitians who otherwise have no access to basic medical care. We took care of coughs, colds, tuberculosis, and cerebral malaria. We had all ages of patients ranging from a 5 day old infant to patients well into their 80s. We heard harrowing tales of illnesses and injuries that were the direct result of Hurricane Matthew, which hit the island in October of 2016. Two of the patients lost eyesight in one eye due to the trauma of falling branches and walls. One of my patients lost her son and her mother during that storm.  Many patients were still experiencing emotional stress related to the hurricane. At times there was nothing for us to do except commiserate with the patients on their life-changing experience.

While there were many sad things that happened in Haiti, there was hope too. The presence of the clinic for over 20 years is beginning to have an effect on the health of the community. Patients who have diabetes and high blood pressure are now well managed on medications and dietary changes. They are proud to have doctors who care for them and who regularly return to Haiti to see them.

We were also able to make important interventions in the lives of pregnant women and babies. We have a strong referral program to the Center of Hope which cares for mothers who are age 18 or under. Moms with anemia get nutritional support and supplementation. They are able to provide prenatal care that is otherwise unavailable in Haiti.

Overall I had a wonderful experience. It is touching to know that I can have an effect in such a faraway place like Haiti. I hope to bring back inspiration to my patients here in San Diego. While our lifestyles may look starkly different, we all have the same hopes and dreams: healthy and happy families.

Below are a few photos from the trip.

If you would like to learn more and support these medical missions, please visit the Seattle-King County Disaster Team website.

Find your doctor in San Diego

Find your family doctor in San Diego, a primary care physician with a general family practice. Schedule an appointment visit with doctor Alexandra Myers, DO.